An insatiably curious individual about past things, whether religion, philosophy, or music, John Fahey was a great "explorer" of the guitar, borrowing from the traditions of pre-war blues guitar and bluegrass. His discography is vast, having recorded about an album per year between the ages of 18 until his death at age 61.

His stylings and preferences on the guitar are just as multi-faceted as his curiosity; he notably played a Bacon & Day guitar in the 60s, which is like a mythical elder sword (given how rare they are), was an expert lap-style player, using his great Weissenborn, and was a learned student of bluegrass, early jazz, blues, and even classical music.

This page at the present time covers Fahey's music more from the usual perspective of his 50s and 60s stuff, but that's not meant to discount his other stuff. Usually, from this time period, his music is heavily-brooding, or so earnest that it's lucky that he recorded his stuff for anyone to hear! It's a great library and just as great to try and pickup.

John's guitar style is truly a fascinating one. Of course, Fahey always was switching styles through his life, but this will focus on his 1950s & 1960s playing.

In terms of a broader picture, Fahey during the 50s and 60s played with kind of a Mississippi John Hurt and Elizabeth Cotten starting point, and seemed to make his unique departure from there; then again, in a Guitar Workshop video on Youtube, Fahey claims that - though him and Elizabeth Cotten used to go to parties together - he'd already developed his own Vestapol tuning style before meeting her. On the other hand, he mentions that Elizabeth Cotten taught him a good tidbit about how to play Spanish tuning slide; that is, by placing the slide across all the strings. It would be great if he could expand on this, which I'm sure he'd be able to do at length, but it at least gives a glimpse of how he approached the guitar.

In terms of some of the techniques he used, of course there are the alternating basslines, bluegrass picking patterns (at times), Hurt-style treble-side melodies, often packaged with blues chord progressions, or other folk progressions. One facet of Fahey that stands out is his restraint; it's clear that he could make the guitar sound more like Tommy Emmanuel if he wanted to, but he had a kind of artistic ascetiscm, which is demonstrated by his amazing output of work. 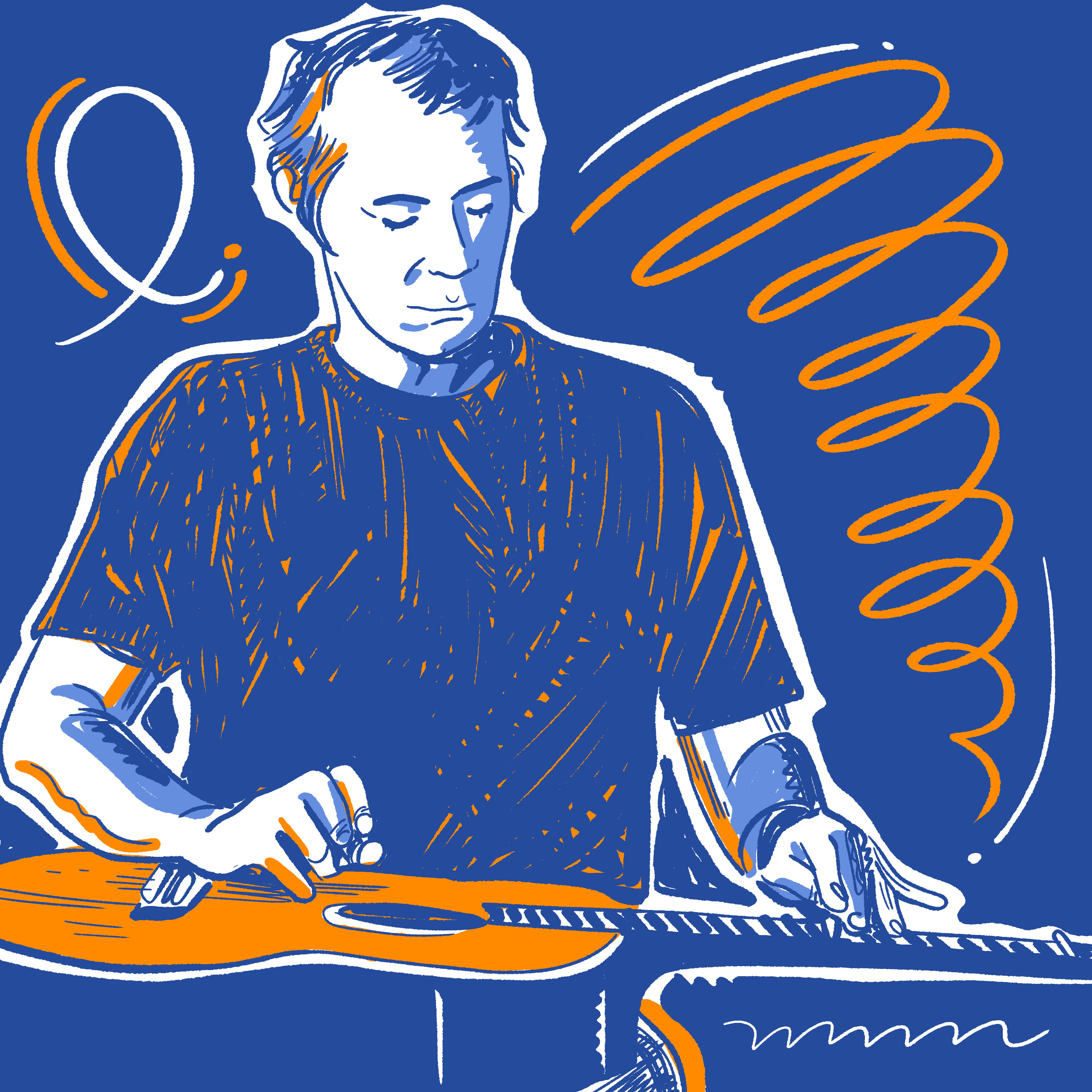 Fahey was born to a decently musical family in Washington, DC, in 1939. Soon after that, as WWII was winding down in 1945, Fahey's parents chose Takoma Park, Maryland as the city in which to raise young Fahey. In his early years, on top of the musical exposure which he undoubtedly gained from his parents' piano playing, they seemed to steep him in the great country & bluegrass music which would pass through their hometown. Notably, Bill Monroe's playing on Blue Yodel No. 7 helped to spark what would become Fahey's lifelong curiosity about music.

Clearly, Fahey's individual tastes, beyond just his parents' tastes, began to blossum in his teenage years (which took place in the early 50s). Evidenced by his purchase of a $17 Sears & Roebuck guitar at the age of 13, Fahey probably began to realize that music was his path to roam. Of course, known as a voracious student of history, he began to collect records at this time, and scored a surprise record by one Blind Willie Johnson, playing "Praise God I'm Satisfied", during a record hunting trip in Baltimore. With a mixture of record-collecting tastes ranging from old jazz, to pre-war blues, to bluegrass, and even classical composers, the primordial soup was set for Fahey's unique style.

Wanting to follow in the footsteps of his newfound heroes, Fahey sought out the awesome Joe Bussard, who helped record Fahey in 1958. From then on, Fahey recorded about an album a year until his death, which is quite a remarkable feat and shows how much music was part & parcel to his life. Around the same time, perhaps with encouragement from his parents, Fahey began his studies (in pursuit of old ways of the past) studying Philosophy, Religion, and eventually Masters in studying the music of Charley Patton with the help of one Alan Wilson.

The rest of Fahey's life clearly revolved around music, and though he was plagued by ill mental & physical health throughout this life, he still managed to through-put an amazing body of work which is rife with hidden gemstones all over the place.