Bad Luck Blues
Both Blind Lemon's vocal & guitar performances are so great on this tune. As he belts out inspired vocal lines, the guitar part steadily crawls along with his
Black Snake Moan
Black Snake Moan is one of Blind Lemon Jefferson's most well-known songs; featuring his classic tremelo picked notes and improvised, single-note lines
Broke and Hungry
Here's a nice Jefferson song which has a gentle, melancholy feel to it, flowing with hypnotic guitar lines and the usual, great vocal performance
Corrina Blues
Learn the song, Corrina Blues, by the great Blind Lemon Jefferson on the guitar. For beginners and experienced guitar players alike, and with tabs
Easy Rider Blues
Replete with a tasteful, main guitar riff, in usual Jefferson fashion, he peppers Easy Rider Blues with nicely-fitting bassline runs and luscious chordal strums
Electric Chair Blues
Here's another Blind Lemon Jefferson song — 'Lectric Chair Blues; it is quite amazing how Jefferson had such an endless array of ways to play the blues
Got The Blues
Got the Blues features Jefferson's characteristic tremelo picking, razor-sharp (and quick) pull-offs, and descending double-stops — all of it at a rapid tempo
Jack O’ Diamonds
One of Jefferson's most harrowing songs, Jack O' Diamonds is truly a Texas Blues classic, having been also covered by the likes of Mance Lipscomb and others
Long Distance Moan
Listening to the riffs he incorporates in Long Distance Moan, one is hard-pressed to find any other blues musician who played this way during the era
Prison Cell Blues
Although Blind Lemon's vocal prowess is beyond top-tier throughout his recordings, Prison Cell Blues is especially great; he sings with such strength and clarity
See That My Grave Is Kept Clean
As one of Jefferson's most renowned songs, See That My Grave Is Kept Clean (also known an One Kind Favor or One Kind Favour) is a truly harrowing recording
Shuckin’ Sugar
With Shuckin' Sugar, Blind Lemon sounds like quite a classic Texas bluesman; almost with a style that could be mistaken for Leadbelly accompanying him

On top of being a trailblazer as one of the earliest pre-war, solo blues musicians, Jefferson was also a mentor to so many musicians, personally teaching the next generation of Texas blues musicians, such as Lightnin' Hopkins, Mance Lipscomb, and T Bone Walker. As well, his guitar playing is one of a kind. Unlike other strains of blues musicians, where there's a common thread of ideation and riff development from mentor to apprentice (ie. Son House to Robert Johnson), few dared to emulate Jefferson, with his irregular and highly-improvised, intricate lines.

Topped with his magnificent, booming vocals, Jefferson is a gem among the pre-war musicians, and fortunately made many recordings during his all too brief tenure with Paramount.

Although Texas blues musicians are often characterized with thumping, freight-train like monotone basslines paired with juicy riffs layered on top, Blind Lemon employed this as only one of many other techniques. Certainly, he could play this style with ease, as shown in Broke & Hungry (where he sounds nearly identical to his close friend Lead Belly), though he also deployed a myriad of techniques that could shoddily be labelled as Piedmont, Country & Western, and others.

It's sometimes said that Jefferson was influenced very much by piano players, freely tickling bursts of notes with an improvised feel and jumping from octave to octave. This does seem to be in line with his style, for example in Got The Blues, Jefferson pulls out double-time pull-offs, ringing tremelo notes, and ascending runs, all the while fading in and out of more business as usual, chordal accompaniment. This kind of free reign over the guitar, especially at higher tempos, is probably why few of his contemporaries, despite how popular his records were, copied his style; it was just out of reach probably for most players.

Another aspect which is special about Jefferson is that he had many song "templates", in that out of his approximately 100 recordings many had unique arrangements. On the other hand, players like Robert Johnson only recorded a few different "templates", while using different lyrics over top of these common templates. This variety adds much depth to Jefferson's discography, so that there's lots to explore. 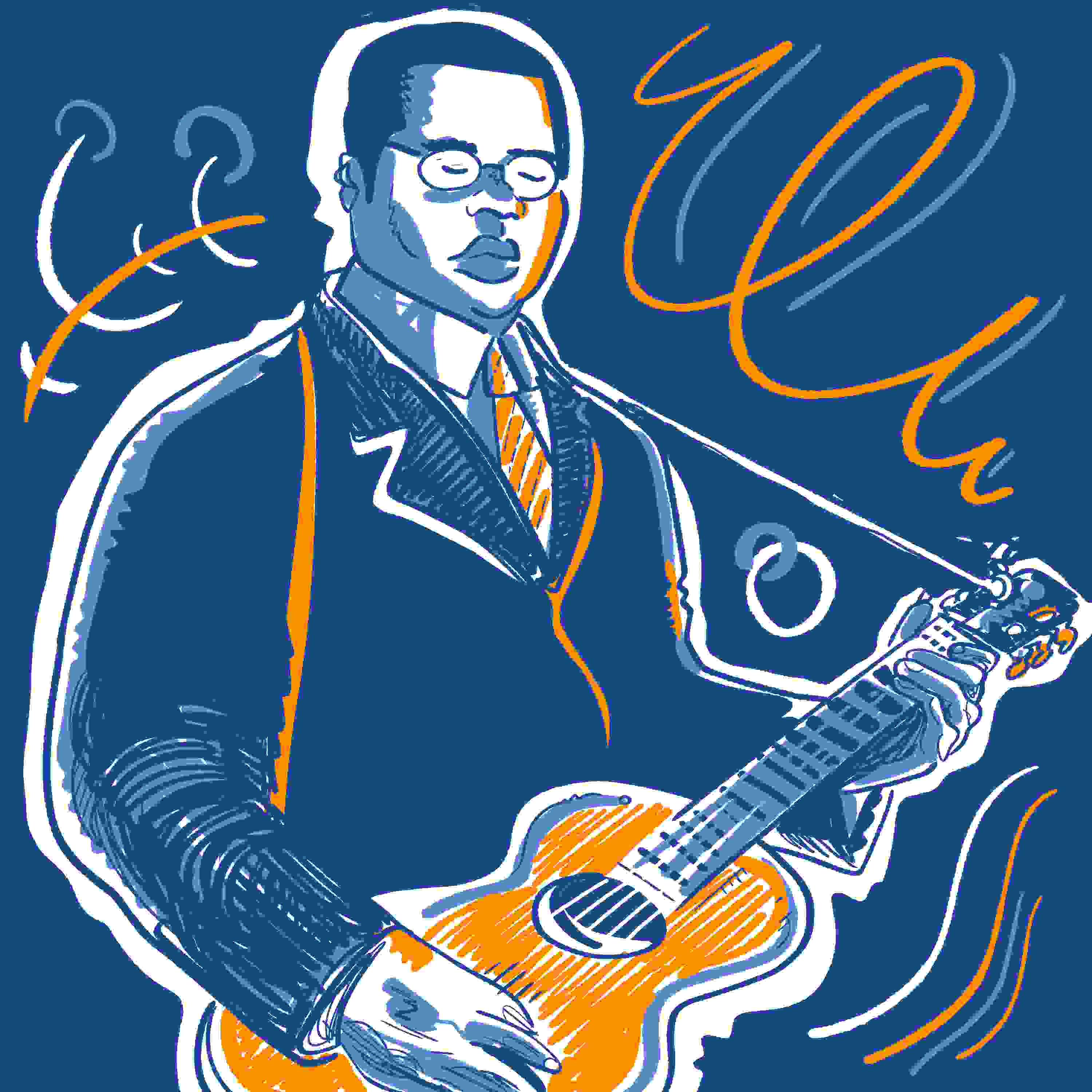 Jefferson was born to a family of sharecroppers on September 24th, 1893, near Coutchman, Texas. With his early life not very well documented, it is known that Jefferson had many siblings (up to 7 or 8) and stayed around the Texas area for most or all of his childhood.

Actually, according to Lead Belly's memory (recounting stories to Alan Lomax in the 1940's), as early as 1911 when he was about 18 years old, Jefferson and Lead Belly partnered as a duo, lightly travelling and performing together; particularly, they travelled to Dallas on occasion. Another account of that 1910s period from his cousin Alec Jefferson, paints a picture of Blind Lemon steadily making a name for himself and gaining invaluable experience. Alec Jefferson was quoted as saying Jefferson would play on street corners, with street hustlers running too and fro, selling their bootleg wares, while Blind Lemon would sing from 8pm to 4am straight — song after song; him just sitting there and playing.

The next definitive check on Blind Lemon's timeline comes around 1917, when he submitted his draft registration and also likely moved to the Deep Ellum section of Dallas. According to his draft registration, he stated, interestingly, that he had been blind since birth (and he also recalled his birthday as being October 26th 1894 rather than September 24th, 1893). Other interesting notes from this period include that he apparently began mentoring a very young T-Bone Walker (then known as Aaron Thibeaux Walker). Famously, Jefferson was a high-earner, considering the usual social barriers of the time, earning very well for himself.

The real, trail-blazing side of Blind Lemon's story came in 1925, when he first got signed to Paramount. Taking note of this year, Jefferson recorded before well-known legends such as Charley Patton, Son House, and Robert Johnson, among many others. Although others had recorded solo blues recordings (such as Sylvester Weaver in 1923), Jefferson's fresh presence in the burgeoning recording world was like a tsunami. Travelling to Chicago in December 1925 through January 1926 to make his first recordings, he used a pseudonym called "Deacon L.G. Bates", next recording under his own name in March 1926 — recordings ("Booster Blues" and "Dry Southern Blues" which proved to be hits). Boosted from that success, Paramount kept calling Jefferson back. His next session with "Got the Blues" and "Long Lonesome Blues" earned six-figure sales which was huge money for the time. All in all, he recorded approximately 100 songs from then on, until 1929.

From an opportunity standpoint, the proven success of Blind Lemon, most likely then led to Paramount recruiting such artists as Blind Joe Reynolds, Blind Blake, Barbecue Bob, Son House, and Charley Patton; musicians who (who knows) may not have had the chance to record had it not been for Blind Lemon's pioneering of the blues recording field.

After just those few years of great success, Jefferson died in Chicago in the morning of December 19th, 1929. Since then, theories have circulated about what truly caused his death. Was it just a natural heart attack after a snowstorm, was his chauffeur bent on stealing his riches (therefore murdering him in cold blood), or did a lover poison him? In any case, full closure on his death may never arise. As listeners, it's simply quite fortunate that Jefferson's career was packed with many recordings to listen back on, and the fact that he helped popularize solo guitar blues so that many other artists (like Blind Blake, Patton, and House) were also recorded.

Notably, despite Jefferson's plea in See That My Grave Is Kept Clean, Jefferson's grave remained unmarked until 1967, when a Texas historical marker was brought to his Freestone County, Texas burial site. With the marker in withering condition by the mid-1990s, a much more fitting, granite headstone was erected in 1997, featuring his immortal One Kind Favour lyrics inscribed on the headstone. Later in 2007, the initially named Wortham Negro Cemetary was renamed as the Blind Lemon Memorial Cemetary